What is Hampton doing about crime? 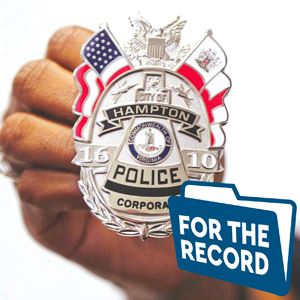 More uniformed police officers patrolling the streets. Increased community outreach. Tougher prosecution. A new high-tech crime center. These are just some of the tools in use now — or planned for the near future — to combat crime in Hampton.

Any crime is too much, but for the record, Hampton's crime rate is below the region's average. The odds of someone being a victim of a violent crime in Hampton in 2016 were less than 1/3 of 1%. The property crime rate is a little higher — but under 4% and right at the regional average.

In reality, however, those odds aren't spread evenly around the city. Because much of the crime is between people engaged in illegal activities, the risk for average law-abiding residents is much lower.

Crime has risen for the past three years, as it has in much of the country. That's a big concern. Still, Hampton is much safer than it was a decade ago. Violent crimes are down 20% compared with 2006, and property crimes are down 5%.

Q: How is the city cracking down?

A: At a news conference early this year, Police Chief Terry Sult summed up the feelings of the city manager, City Council and others when he said, "Frankly … enough is enough." The chief then laid out plans for a multi-pronged offensive, including zero tolerance for gun crimes. "Do the crime and you will do time," he promised.

Q: What are the new initiatives?

A: City Council has approved a fiscal year 2018 budget that includes adding 12 police officers. Also, work has started on a high-tech crime information center on the ninth floor of City Hall, where analysts can monitor existing camera feeds for information. Cooperating closely with federal officials can bring tougher sentencing in federal courts.

Q: I don't believe crime is down. Show me the numbers.

Q: What about prevention?

A: The police conduct outreach programs such as Coffee with a Cop and A Safer Hampton Roads continue, and there is a summer basketball league for teens and young adults called Hampton Hoops. The city has a Youth Violence Prevention office that runs a summer employment program, offers community grants, and puts on events to educate families about resources.

A: Keep an eye out in your neighborhood. Call 911 if you see something that's an emergency. If you see a less-critical situation — spot a suspicious person or hear gunshots — call the non-emergency number at 757-727-6111. Increase your own safety with these police tips.

In an online chat with the community, City Manager Mary Bunting noted: "We have significantly upgraded law enforcement technology, added positions and amped up youth violence prevention and intervention efforts. At the end of the day, government cannot stop crime by itself. … We all must do our part, and that begins with reinforcing community expectations that crime is not acceptable."

Q: How can my neighborhood get help from the police?