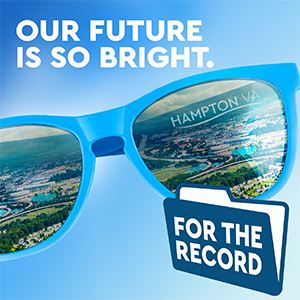 Hampton was the setting for the nationally acclaimed book and movie "Hidden Figures," the story of Katherine Johnson, Dorothy Vaughn, Mary Jackson, and other African-American female mathematicians who helped NASA get to the moon. And Hampton continues to get national attention.

For the record, we were named:

And the Hampton Roads region was named the nation's fastest-growing metro area for millennials. These are just some of the reasons our future's so bright.

A: An Expedia website released a list of 15 cities in September they called "hidden gems," compiled from travelers and places getting buzz around the country. Some appealed to specific groups – luxury travelers, history buffs, thrill seekers — but Hampton's appeal was for eclectic groups, for having something for everyone. The website cited history, nature, architecture, waterfront, beer and shopping, as well as the Blackbeard Festival.

Q: How can Hampton be a beer town?

A: It all started with the St. George Brewing Co., the first craft brewery in Hampton Roads and the second in Virginia. Since then, Oozlefinch and Bull Island have opened. And the listing of Hampton as the No. 1 choice by the website Tasting Table came in August, before the opening of Capstan Bar Brewing and the Vanguard. The city's first cidery, Sly Clyde in Phoebus, is on the way as well. As the Tasting Table said, "Hampton, Virginia, is an ideal choice for anyone who enjoys history alongside their hops."

Q: How innovative is Hampton?

A: The Innovations in Government Award is headed up by Harvard's Kennedy School's Ash Center. It is "the nation's preeminent program devoted to recognizing and promoting excellence and creativity in the public sector. The program highlights exemplary models of government innovation and advances efforts to address the nation's most pressing public concerns." Hampton's "I Value" public input for the annual budget was named a Bright Idea in January, and was one of 7 innovative programs (of the 500 entered) asked to present to a panel of judges at Harvard. Hampton didn't win but did get a $10,000 grant to replicate the program.

Q: What kind of diversity was considered?

A: The website 2018's Most Diverse Cities in the U.S. ranked more than 500 cities to see how diverse they are. While some studies may only look at race or culture, this one considered statistics: social class, ethno-racial, economic and household diversity. In the May 2016 study, Hampton ranked 25th in the nation overall, taking the 4th spot for most economic diversity. The website noted that past examples have shown that, "local economies that diversified, tapping into new ideas and innovations, proved to be more resilient than the cities that stuck to their old tricks."

Updated numbers for 2017 added in household diversity and religious diversity, where Hampton was a little more uniform, dropping the city's overall rank, but keeping it in the top third. Still, in 2017, the city's economic diversity remained 24th in the nation and 2nd among mid-size cities, just a notch ahead of Norfolk.

Q: Which shows on HGTV? I haven't seen it.

A: "My Lottery Dream Home," hosted by David Bromstad, came to Hampton when a Richmond couple who won $1 million went searching for a waterfront vacation home. Bromstad helped show off houses in Buckroe Beach, Silver Isle and Grandview. They also filmed at The Deadrise restaurant. More recently, "Beachfront Bargain Hunt: Renovation" came to Hampton to film the experiences of Dave and Jen Denton, a couple who wants to raise their two sons along the shores of Hampton. The show highlights their search for a new home and the work they did on the "fixer-upper" they found in Elizabeth Lake. Dave grew up here, and the family says Hampton's biggest asset is "it's waterfront property and beaches." Why go on TV with their experience? "We wanted to take on showing off our community and all it has to offer."

Word is that HGTV is coming back soon, but details are kept secret.

Q: We've heard of Mango Mango, but what is J&F?

A: First: Forbes business magazine released a list in August of top 12 black "Shark Tank" entrepreneurs who found success after their appearance on the TV reality show. On the list were Hampton's Mango, Mango Mango Preserves owners Nzinga Teule-Hekima, Lakesha Brown-Renfro and Tanecia Willis. Since their first "Shark Tank" appearance in 2013, Mango Preserves has become a million-dollar company selling products nationwide and on the QVC shopping channel. The women have added other enterprises too, all located in Phoebus: Mango Mangeaux restaurant, Simple Panache Place hotel, Simply Panache Nail Bar & Pedi Spa, and a small boutique hotel/B&B. They're in the process of opening a new event space — also in Phoebus.

The Hampton technology company J&F Alliance Group was named the 2017 Minority Technology Firm of the Year by the U.S. Chamber of Commerce's Minority Business Development Agency. Based in downtown Hampton, J&F is a software service company that provides customized augmented reality, mixed reality and virtual reality applications for military services and the Department of Defense. CEO Falana Dula-King started the company in 2013; her husband, JarMarcus King, is the vice president. Both served in the Army and the company works closely with the Department of Defense to develop mobile applications and training solutions. J&F recently presented to a national chamber group how augmented reality, virtual reality, and mixed reality applications will fundamentally change manufacturing processes, using a demonstration with a holographic V8 engine and maintenance application.

Q: How can Hampton Roads be first for millennials? Who said so?

A: Time magazine did a story based on data from the Urban Land Institute, which was picked up by local media outlets. The Hampton Roads region topped the nation in the percentage increase in millennials between 2010-15, at 16.4 percent. The region has always had an above-average share of people aged 18-25, partially due to the military presence, but this was a gain of 7,034 people in the age range of 25 to 34. Richmond was second. Other metro areas in the top 10 included Riverside, California; Memphis, Tennessee; New Orleans; Austin, Texas; Pittsburgh; Baltimore; Boston; and Miami.