Mayor Donnie Tuck delivered his State of the City address Dec. 1, 2022, at the Hampton Roads Convention Center, spotlighting the new Hampton Aquaplex as an example of new thriving businesses and developments in the city over the past two years.

The presentation, titled “Making a Splash,” marked the first time since 2019 that the State of the City address was delivered to a live audience. Due to the coronavirus pandemic, Mayor Tuck delivered the address virtually in 2020, and last year's event was canceled. An audience of more than 500 attended the event, which was put on by the Virginia Peninsula Chamber of Commerce.

“We’ve endured a lot, but we’ve come through,” Mayor Tuck said. “In fact, development has thrived in Hampton over the past two years. We’ve seen the fruition of projects already announced. We’ve seen new development, and we have many new projects under way.” 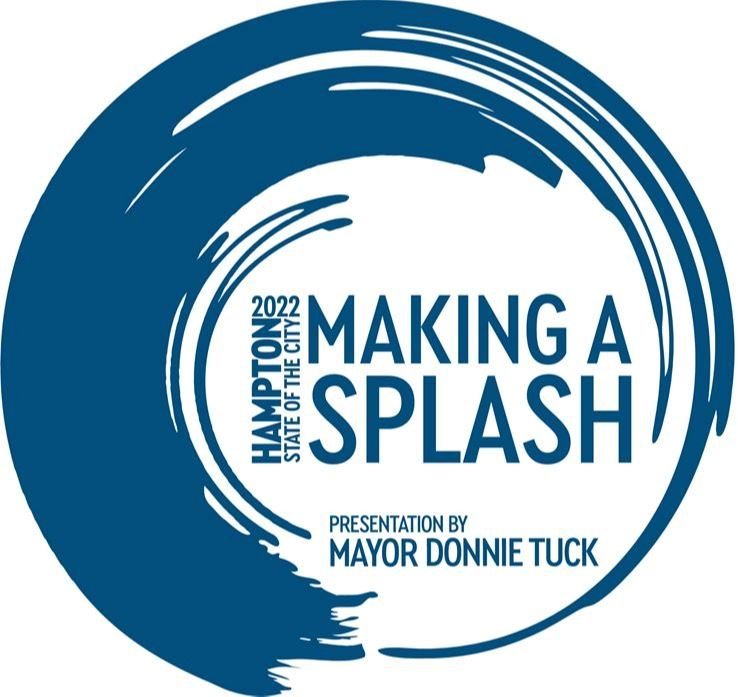 He outlined the economic impact of the new Aquaplex, noting that one event alone — the 2023 USA Artistic Swimming Junior Olympic Championship — is projected to fill more than 2,100 local hotel room nights and generate an economic impact of $3.7 million for Hampton Roads. He stressed that the Aquaplex, along with the Boo Williams Sportsplex, will lead the region’s sports tourism industry, and he praised the program that will provide free swimming lessons at the Aquaplex for all Hampton City Schools second graders.

Hampton has one of the region’s lowest crime rates and has seen a decrease in gun-related crime in 2022 compared to a year ago. But Mayor Tuck noted that the city has seen a rise in violent crime since the start of the pandemic, noting that Hampton’s numbers reflect similar trends all across the country.

“It is unacceptable,” he said. “I have become personally involved in this issue and rallied the other mayors in Hampton Roads. Regional issues need regional solutions. We must work together.” He said Hampton has directed $2.4 million in federal pandemic funds toward programs for young people, including at-risk youth.

He cited the expansion of the city’s Summer Youth Employment Program, and the city’s financial support of many grassroots programs in the community aimed at teens and young adults. He talked about several new commercial developments in the city, including NorthPoint’s Phenix Commerce Center and W.M. Jordan’s Harbor Commerce Center, and he spoke of new Virginia Tech research facilities on the downtown waterfront that reflect the city’s commitment to the seafood industry and resiliency to the issue of sea level rise.

“We aren’t doing it by ourselves,” Mayor Tuck concluded. “We are working through and with the people in this room, and in the rest of the city of Hampton. … Developers, educational partners, nonprofits, volunteers, educators, city staff — it takes a lot of people to make a city like Hampton as great as it can be.”

What: State of the City

State of the City intro and Aquaplex promotion